Posted by theministry on 5th July 2012

To peacefully create your own nation, it is necessary to maintain good relations with the nations and officials surrounding you.

So that is precisely what the children of the Children’s Republic of Shoreditch have done.

In an effort to make sure the Republic is on nothing but the best of terms with its neighbours, the children wrote to several officials including the Prime Minister, the Mayor of London, and even Her Majesty the Queen.

They took it upon themselves to describe different aspects of the Republic and the Embassy, as well as using the opportunity to ask for any advice these seasoned professionals might have.

In a letter to Foreign Secretary William Hague, writer and junior minister, Ruby, wrote, “Along with silly laws like, ‘Anybody who steals has to clean the country,’ there are serious laws like, ‘No Smoking.’ Please don’t think we just a bunch of kids mucking around. We are serious.” They also wrote to Sebastian Coe to ask whether there was still time to enter a team for the Olympics. For photos of some of the letters and the opportunity to read a selection of them, please visit our Letters to VIPs Flickr set. 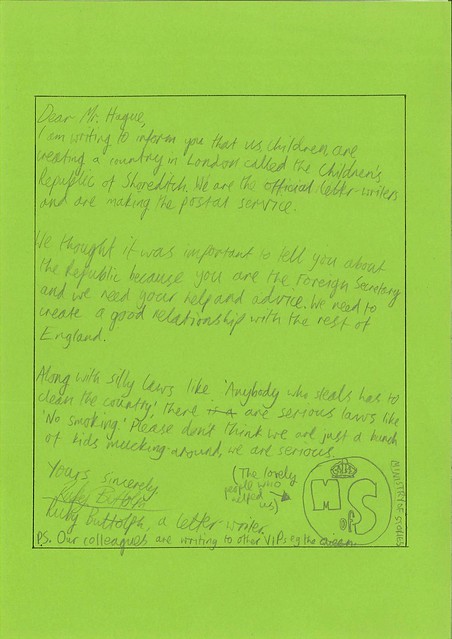 The Children’s Republic of Shoreditch

The Embassy of the Children’s Republic launch